Concrete Creep problems are serious from point of view of serviceability problems, stress redistribution, prestress loss, and even failure of structural elements but most people ignore the effects of creep in concrete.

Join us before you get lost in reading what is creep in civil engineering useful information so that you can read our every information, useful article of Civil Experience.

Definition of Creep in Concrete 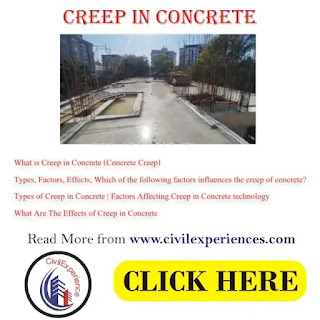 Escalation of stress in cement concrete over time under constant (stable) stress is called creep.

The shrinkage of concrete and creep of concrete occurs at the same time and they are assumed to be additive for simplicity.

What is Creep Recovery?

When the sample element is free from load the immediate recovery or elastic recovery is followed by a gradual decrease in strain known as creep recovery.

Although creep recovery is much faster compared to creep, the creep strain is not the opposite total.

Mechanism of Creep in Concrete

What is Creep Relaxation?

If a loaded cement concrete sample is viewed as being subjected to a continuous strain, the creep decreases the stress progressively with time duration. This is known as relaxation.

Creep in Concrete is also known as

Creep is a function of time

The creep proportions may be due to the viscous flow of cement paste/slurry due to the closing of the internal voids and the overall crystalline flow.

But it is conceded that a large portion is produced by the seepage of colloidal water from the gel formed during the hydration process of cement.

The rate of getting rid of the colloidal water is a function of the applied compressive force and of the friction in the capillary channels.

If the force is greater, the sleeper the pressure gradient, with a resulting increase in the rate of emitting moisture and deformation.

Types of Creep in Concrete

Generally, Types of Creep in Civil Engineering are mentioned below with short notes.

Application of constant stress on a concrete specimen under conditions of 100 percent relative humidity, leads to an increase of strain over time, which is called basic creep

It is the ratio of ultimate creep strain to elastic strain

Also Read: Types of Cement in India Used in Construction

Creep occurs due to

Which of the following factors influences the creep of concrete?

Also same answer for what causes creep in concrete.

The magnitude of creep depends upon the following factors

Also Read: What is Workability of concrete | Factors Affecting Workability

Effect of Type of Cement in Creep

Intensity and Duration of Stress

What Are The Effects of Creep in Concrete is the key target to learn and know about concrete creep comes in engineer’s minds.

Above all are examples of effects of creep in concrete if you think we forget some then write in the comment box.

How to Prevent Creep in Concrete

The correct answer for Creep in concrete structure increases with Decrease in humidity.

The correct answer for Creep strains in concrete structures is usually is [D] caused by sustained loads.

Also Read: What are the Factors Affecting the Choice of Concrete Mix Design

If you gain valuable solutions from Civil Experience then must follow us for the latest updates & important materials/solutions.

Help your friends by sharing this article. Also, share your idea/problem/Suggestion in the comments box. 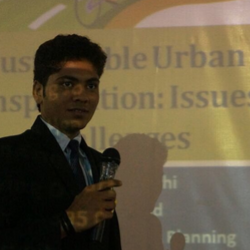 It is my pleasure to welcome you to civilexperiences.com, a website created and managed by Dudhat Aakash. In addition to having a Bachelor's degree in Civil Engineering