In this article, we will be talking about structural components for the correct structure of DNA components that can be presented of a Reinforced concrete building

A Reinforced Concrete building is made up of elements that transfer the loads applied on it to the ground and maintain the structural integrity of the building. 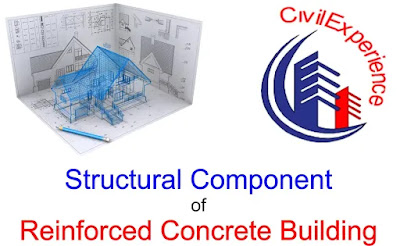 For this article, we assume a 4 storied luxury building having a podium and a basement.

Starting from the substructure first, we have is the Plain Cement Concrete, also termed as PCC

Also Read: What is Light Weight Concrete? And Why Should You Care?

After PCC, the foundation is laid which takes loads from above and transfers them to the ground below it.

Isolated or combined footings can be connected by Tie Beams if required by design.

Next, we will see the retaining wall or basement wall.

Also Read: What is Haunch Bar? Why provided?
Next, we are looking at columns below the ground also called a column neck as their length is shorter.

After ground beams come to Slab on Grade or SOG.

Next, we are looking at the podium with a little decal of our channel.

Next, we will talk about pits, manholes and trenches for drainage purposes.
Also Read: What happens if no proper cover thickness provided in concrete?

This ends our substructure and now we will see superstructure members.

Next, we discuss various types of walls present in the superstructure.

Next in Superstructure comes Floor beams

Beams are basically of 2 types.

There are various types of slabs based on the structural load transfer mechanism. Based on the design, the slab can be broadly categorized into 2 types first is a Framed Slab System and the second is a Flat Slab System.

Last but not least comes stairs which can be cast at the site or can come in precast panels.

Also Read: What is Lintel? 7 Types of Lintel And Their Uses in Building