The ranking of these best 11 civil engineering universities is based upon the quality of education, research work, and job opportunities for these universities’ graduates. 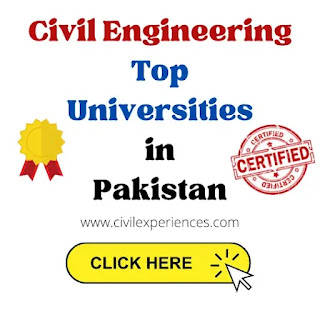 Under the administration of the Pakistan Armed Forces, the National University of Science & Technology (NUST) is a public research university with its main campus in Islamabad, Pakistan.

Including doctoral and professional degrees, the university offers undergraduate and graduate programs.

Founded in 1991, through the combination of engineering colleges and schools of the Pakistan Armed Forces, it was initially created for commissioned officers’ needs. It was later converted into a public research university to promote science and technology in Pakistan.

University of Engineering and Technology is one of Pakistan’s premier higher education institutions, focusing on science and engineering development.

University of Engineering and Technology's civil engineering programs include research in the interdisciplinary field of earthquake studies that began after the massive earthquake struck the nation in 2005.

Previously it was college. In 1980, under the name University of Engineering and Technology, this college was granted a charter to operate as an independent engineering university.

University admissions depend on whether the applicants live in the province of Khyber-Pakhtunkhwa. Some quota categories would allow students to enrol from the Federally Administered Tribal Areas (FATA) and other Pakistani provinces.

UET Peshawar is ranked 5th in the I.T./Engineering field by Pakistan’s Higher Education Commission, which is the country’s highest regulatory body for higher education institutions.

The University of Engineering and Technology, Lahore (UET Lahore) is a public university specializing in science, technology, engineering and mathematics (STEM) subjects in Lahore, Punjab, Pakistan.

UET Lahore is Pakistan’s oldest and one of the most prestigious engineering institutions.

UET Lahore was established in 1921 in Mughalpura, later named as ‘MacLagan Engineering College‘ in 1923 when Sir Edward Douglas MacLagan, the then Governor of Punjab, laid the foundation stone of the main building, now called the Main Block.

UET Lahore is generally considered to be one of Pakistan’s best and most prestigious engineering colleges, where more than 50,000 students apply every year for entry.

UET Lahore has a close association with the University of South Carolina and Manchester University.