Retaining walls serve the important role of holding back soil and rock, just as dams hold backwater. In this article, we showed that Practical result

In this article, we showed that granular materials, such as soil and rock, generate horizontal pressures that increase linearly with depth.

Retaining walls must resist these pressures, and many strategies exist for doing so. In this Civil Experience Article, we focus on a popular, L-shaped, cantilever design (L shaped retaining wall design theory)

If you were going to use an L-shaped Retaining wall to hold back soil and rock, as represented by these marbles, would you point the bottom leg toward the marbles or away from them?

Many people would say that the base of the “L shape” should face away from the marbles.

They probably realize that it is hard to tip the wall over toward the left if the bottom leg points in that direction. In engineering, we call tipping like this “overturning”.

If the bottom leg points the other way around, it is easy to make the wall overturn so easy, in fact, that I can do it with just a puff of air. It looks like the case is closed. Or is it?

Before we declare a final verdict, let’s use the model to find out what happens when the bottom leg points to the left, away from the marbles.

As we add marbles, we discover that the horizontal forces they produce create yet another mode of failure, namely sliding of the wall and this occurs when the marbles reach a depth of 3 centimetres.

In the model, we can increase the friction between the retaining wall and the base by placing a rubber mat between them.

You will have to do some extra reading if you want to find out how they achieve this end in the real world.

As you can see, increasing the friction allows our model wall to support a noticeably greater depth of marbles. But it still eventually fails by overturning, in this case, when the depth reaches 8 centimetres. 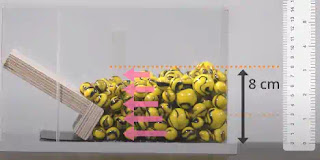 Now, let’s turn the wall around so its bottom leg points toward the right, the side where the marbles will be placed.

We again use a rubber sheet to prevent sliding, and we add some marbles. As before, the marbles generate a horizontal force that depends on the marble depth. You might be surprised that this wall can hold back 11 centimetres of marbles before it overturns.

Can you explain why the wall can resist a greater height of marbles when the bottom leg points toward them?

Is There an Additional Force in Retaining walls?

Is there an additional force that comes into play? Recall that granular materials generate both horizontal and vertical pressures.

The downward pressure also increases the friction between the bottom of the wall and the ground, thereby reducing the likelihood of sliding. 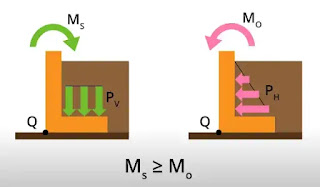 When engineers design L-shaped retaining walls, they imagine them overturning about the point labelled Q.

They first calculate how strongly the soil pressure will tend to make the wall rotate about Q. We call this tendency to tip an overturning moment, and we label it MO.

Next, they figure out the stabilizing moment, MS, produced by the soil pushing downward on the horizontal leg of the wall.

Lastly, they make sure that the horizontal leg is long enough that the stabilizing moment is at least as large as the overturning moment. Then the retaining wall will be stable.

Lots of other clever approaches can be used to design retaining walls, but we do not have time to discuss them here.