In this article, we can take a look on What are the constituents of good brick earth? and What constituents render bricks earth unsuitable Constituent

In this article, we can take a look on What are the constituents of good brick earth? and What constituents render bricks earth unsuitable for manufacturing bricks?

First, we discuss Constituents of good brick earth which play a great role in manufacturing brick

It is the principal component of the bricks earth and good brick earth must contain about 20-30% alumina. 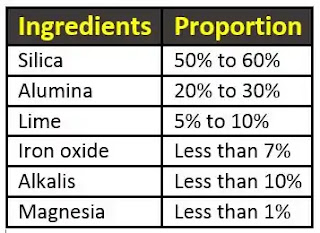 However excess alumina leads to shrinkage and warping of bricks.

Silica exists in clay either free or in combined form. It prevents shrinkage, warping and cracking of bricks apart from imparting a uniform shape to the bricks.

However excess silica destroys the cohesion between the particles of the bricks earth and the bricks become brittle.

About 5 to 6% iron oxide is desirable in good brick earth.

Excess of iron oxide leads to dark colouration in bricks like dark blue or blackish colour.

However less quantity of iron oxide makes the bricks yellowish in colour.

About less than 5% of lime should be present in good brick earth. It should be in the very finely divided powder form.

It prevents shrinkage of bricks.

A very small quantity of magnesia gives the yellow colour to bricks.

Now, we learn something about Constituents that make the bricks of earth unsustainable

Pebbles in brick earth does not allow uniform mixing of clay thereby leading to weak and porous bricks.

Iron pyrites cause the bricks to disintegrate on burning because of the oxidation of iron.

Alkalies (particularly soda and potash) acts as a flux in the kiln and they cause bricks to fuse.

This moisture on evaporations leaves behind a white patch on the surface of bricks masonry.

Presence of vegetation and other organic matter in brick earth aids in burning.

However such matters if remains partially burnt then bricks will become porous due to the evolution of gases on burning.