The great Scientists Albert Einstein once said: “Scientists are investigating what is already happening; Engineers are building what never has been before”. His names completely capture the meaning of the engineer and his importance to our country.

As we move towards the vision of New India it is important to use the knowledge combined with the expertise of lakhs of engineering graduates who pass through India every year. 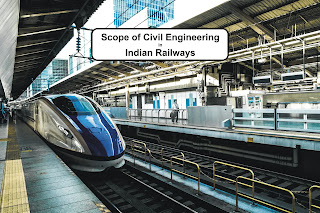 State engineers in particular have an important role to play in building New India and in the past, helping to transform the country into a modern economic powerhouse.

The scope of their work at India Railways is as great as our desire to transform the nation. Any engineer wishing to build feels comfortable in the Indian Railways family as the railway is the critical infrastructure of any modern industrial economy.

Here I share with you some of the challenging tasks performed by Indian Railways that show the opportunity, ability, scale and power of engineers working on Indian Railways.

The Anji bridge will be built on the Anji Khad, a tributary of the Chenab River

The alignment of the tunnel discusses the Himalayas' most difficult terrain, where the area is gaps, remote and inaccessible and lacks basic infrastructure, making the project a major challenge.

The current state of artistic ventilation and public address systems should be used. Control rooms, CCTV and real-time collection and analysis of a program called SCADA will be used. The target for completion of March 2020

Construction of a new BG line project from Jiribam to Imphal in Manipur district, bordering Myanmar

Bridge No. 164 crosses the Ijai River valley near Noney, with a length of 141m

It will be the longest railway line in the world of Girder Bridge, surpassing the existing 139m record of the Mala-Rijeka viaduct, Montenegro

Scheduled for completion in December 2019

The Chenab Bridge is 359m high above the river bed and has 467m of single arch space across the main Chenab River.

Chenab Bridge is located near the Salal Hydro Power Dam

It will be the world's highest Railway Arch Bridge.

Chenab bridge completed in July 2019. Bridge continuity is over 75%.

Also Read: Concrete Mix Design as per IS CODE

Indian trains undertake the work of Jammu Udhampur Srinagar Baramulla Rail Link Projects, where a railway line (total length of 345 km) is being built to connect the Kashmir Valley with the rest of the country.

This bridge is a marvel of engineering with its rectangular, hollow, 490-foot-long [490 m] pipeline

Despite many environmental and climatic challenges, the construction of the pier was completed during a 38-day recording period.

All of the aforementioned projects reflect the challenges faced by civil engineers in Indian Railways to build different types of infrastructure.